May 17 by Marina Brito 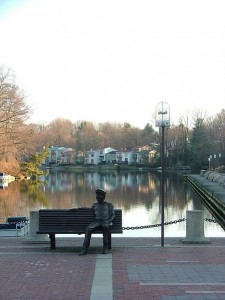 How can one not love a town which has everything – including a couple of Elementary Schools named “Armstrong” and “Aldrin” (after Neil Armstrong and Buzz Aldrin, two of the most famous astrounauts in the history of mankind)?

Reston, VA was conceived in the 1960s by Robert E. Simon (see picture to the right for a bronze statue of him at Reston’s Lake Anne) as a planned community located on the northwest end of Fairfax, VA.   As a planned community, Reston has been carefully designed to allow office space, housing, schools, shopping and recreational areas to co-exist in harmony.

People who live, work, and visit Reston VA love it because of its:

Let’s look at them one by one:

Reston offers all kinds of housing:  from a few homes built prior to 1900 (although most of the homes in Reston were built in the late 1960’s and early 1970’s), to brand new homes.

There are condos, townhomes, duplexes, and single family homes with up to 6 acres of land.

Most of Reston’s communities are nestled within the trees, practically in the woods; and there are other communities that are in modern subdivisions in more open areas of land.

One of the beauties of Reston is that all the homes have ready access to nearby natural settings and recreation.

Aside from the hundreds of acres of woods, plus streams, trails, lakes, parks (and even a small zoo!), the Reston Association also manages other recreational settings such as golf courses, swimming pools, tennis courts, a community center with arts programs, among many others, which are available to pretty much all residents of Reston VA.

Speaking of Reston Town Center, this is also the place where many people go to work.

At the center of Reston VA, in Reston Town Center, there is a sizable number of office buildings which house several Fortune 1000 companies such as Sallie Mae, Sprint-Nextel,  and VeriSign.  Given the large number of companies in the area,  it is quite possible to find a very good job – possibly within walking distance from home…

And, in case walking to work is not possible, one could use public transportation to get to work.

There are a couple of dozen bus routes serving Reston VA , both connecting different points within Reston, as well as connecting Reston to DC through Tysons Corner, the Dulles Airport, and Fairfax County Government Center. Plus, there is a transit station at Reston Town Center which connects many of the routes from Reston to the rest of the Northern Virginia area.

In addition to the bus, the new Metro line currently called the “Silver line” is being built and the plan is to have a few stations along Reston VA. The new Silver line will connect Reston via rail to the Washington Dulles Airport (IAD) to the West, and to Washington, D.C. to the East.

Another good reason to love Reston, in addition to its plentiful transportation options, is its schools.

5. Schools in Reston are very good

All of these high schools have been consistently ranked in the top 6% in the Country by Newsweek’s “America’s Best High Schools”.  In addition to their rankings, you’ll find that parents, teachers, and students are very proud and passionate about their schools.

As you can see, Reston has it all: great schools, plentiful transportation options, generous job opportunities, extensive recreational activities, as well as diverse housing options.

What is there not to love about Reston VA ?

If you want to learn more about how well the Reston area high schools rank compared to the rest of the Fairfax County High Schools,  download the FREE No-Tears Guide to Moving to Fairfax VA.

Image by Joshua Davis on Wikipedia