Last year, Alison was moving with her family from Tokyo, Japan to the DC area.   They chose schools for the kids, and even narrowed down their search to a couple of neighborhoods.   Now the only thing left was to figure out how Alison and her husband, James, would get to work.

So, I helped Alison and James figure out how to commute to DC starting with riding the Metro into Washington, DC: 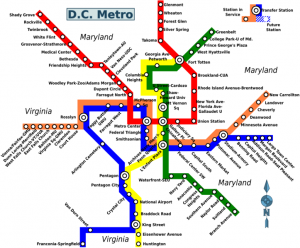 Metro is the subway system that connects DC with its suburbs.

As you can see, the Metro reaches far into Fairfax County, but the County is quite large, and sometimes riding the a bus is a better choice.

There are plenty of bus options in Fairfax County.  The best way to figure out the best route is to use the Washington Metropolitan Area Transit Authority’s (WMATA) Trip Planner.  This trip planner can also include DC Metro rail as an option for part or all of the trip.

Speaking of rail, there is another rail option in Virginia to get to downtown DC – the Virginia Railway Express (VRE)

The Virginia Railway Express (VRE) is another way to commute to DC by rail to and from downtown DC. There are two lines:

If rail and bus aren’t the best options for commuting, driving a car is another option.

To commute to DC driving a car, the major roads that go into DC are:

One thing to keep in mind if one chooses to drive a car is that traffic can be pretty heavy especially during rush hour.  A good way to make driving a little easier is to carpool.

With carpooling, two or more people share the same car when going into or out of the city.  This helps with being able to use the High Occupancy Vehicle HOV-2 (or HOV-3) lanes and saving some driving time.  There are many carpooling arrangements, and one of the most interesting ones is called “slugging”.

If your commute to DC is short, or you are very fit (or hoping to be), you could bike to work.

There are several trails along Fairfax County that host bikers on their way to work.  Mostly, these trails connect locations within Fairfax County.  If you are very fit (or looking to be), you could ride the trails from Fairfax County through Arlington County and into DC.

However, if you live on the western-end of Fairfax County and you don’t need to commute to DC, but rather to another employment area, you could also bike to work.

But what if biking to work was just a bit too hard to do?  Then, you could always mix and match how you get to work.

You don’t have to stick to just one way of transportation when choosing your commute to DC. In Fairfax County, you could ride your bike to a bus stop and then take the bus into work.   You can even take your bike on the Metro.

If biking isn’t for you, then you could drive to one of the park n’ride bus stops, then take a bus to the metro station, and ride the Metro all the way into the city.

As you can see, the possibilities are plentiful.  It’s simply a matter of figuring out what’s best for you, and then enjoying your daily commute.

In the end, Alison and James each chose their preferred method for getting to work based on where they accepted their new jobs and in the neighborhood where they chose to live.

Click for a downloadable PDF of the 7 Tips on Transportation in Fairfax VA WITH links to external resources about each of the tips that we mentioned.

If you have any questions, feel free to post them below.