The Beltway: to HOV or not to HOV?

As you may have heard, the DC metro area has its share of traffic issues. In Northern Virginia, a couple of the most travelled highways are: the famous I-66, which goes from East to West, and the Capital Beltway (or I-495), which encircles the city of Washington DC. 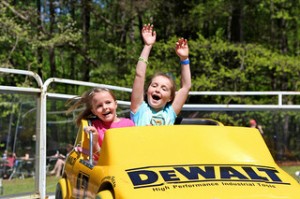 Carpooling around the Beltway can be a blast

If you live in the western side of Fairfax County and drive into Washington DC, you will find that Route 66 might be the most direct route into it.  But you’ll have to time your drive just right because a big part of Route 66 is only open to carpoolers.

People who commute from Western Fairfax County into DC using Route 66, have found that carpooling might help with easing their travelling time thanks to the “High Occupancy Vehicle” lanes (or HOV lanes).  You can recognize HOV lanes because they are marked with a white diamond on the pavement (and on signs too).

Inside the Beltway, from 6:30am until 9:00am, both lanes of Route 66 going East into DC are HOV-2 lanes  (2 or more people per vehicle).   And the same Route 66 outside the Beltway has a dedicated lane for HOV-2 drivers all the way in from Manassas.

In the evening, the restricted times for I-66 HOV lanes are:

Speaking of the Beltway, so far, travelling on I-495 hasn’t been as easy as carpooling to make life easier.  Thankfully, that is about to change with the new 495 Express Lanes.

The 495 Express Lanes will open in late 2012 and they will allow both carpoolers, as well as non-carpoolers to take advantage of a couple of extra lanes in addition to the regular 4-6 lanes of the Beltway.  The difference is that these lanes will be controlled electronically using the transponders that are already in use by the EZPass system of tolls.

Yes, that means that if you want to pay to commute faster, and you have a transponder, you may drive on the Express Lanes even if you are not carpooling with 2 more people.

What if you are carpooling?

If you have more than 3 total people (HOV-3) in your vehicle, you may use the 495 Express Lanes for free. BUT, you must have a “Flex” EZPass transponder switched to the HOV position if you want to take advantage of the free ride.

If you don’t have a Flex transponder, and only have a regular EZpass transponder, then you will be charged for travelling on the 495 Express Lanes at the regular rate regardless of how many people are travelling with you in the car.

Flex EZPass Transponders could be free

So there you go: if you plan on driving up and down the Capital Beltway with 3 or more people in your car, you might want to get a Flex EZPass and take advantage of the HOV 495 Express Lanes.

To find out more about the program, visit http://www.495expresslanes.com/

And what if you don’t have anybody to carpool with?  Ah!  Well, then there are a few other options that we’ll talk about in the near future…

Any questions on commuting?

Let us know if you have any questions about commuting in and out of DC (and around the area) using HOV or Express lanes. We’ll be glad to help.