Why move to Fairfax County VA? 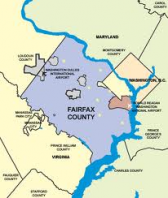 Is Fairfax County right for you?

When Ellen and her family were being transferred to the DC area, she was confused about where to start her search. She knew that DC was too urban for her needs and that led her to research her options in the neighboring suburban counties of Maryland and Virginia.

Fairfax County’s more than 1 million residents enjoy one of the lowest crime rates in the Country. According to the Fairfax County Police, the violent crime rate index for 2008 was as low as .0953%

So we have great schools and a low crime rate. Will researching taxes bring good news too?

The State Income Tax is lower

Virginia, then, at 5.75% has the lowest income tax rate in the Washington area.

But, isn’t it expensive to live in Fairfax County VA?

Plainly speaking – yes, real estate is expensive. However, the relatively high cost of living in Fairfax County is counter-balanced by it having one of the highest median household incomes and one of the lowest (and consistently low) unemployment rates in the nation.

Also, Fairfax County has the highest number of jobs and the largest labor force in the Washington area. This, coupled with a strong transportation network, award-winning parks, and extensive cultural and recreational opportunities make living in Fairfax County worth every penny.

Once Ellen decided to live in the suburbs of Washington, DC, she looked into the quality of public schools in the area, and she narrowed her choices to two counties. The crime rates among these two counties were both low. Then, she researched the cost of housing in both counties, which was also roughly equivalent.

Lastly, Ellen checked the income tax rates and she realized that living in Fairfax Virginia made a big difference in terms of tax-savings. Ellen’s choice was clear: Fairfax County VA was the right place for her family.

If you are planning to move to the Washington, DC area,  Fairfax County is a great choice to live in because of its: